As material properties can be made to vary by introduction of alloying elements to the base material, chemical analysis is important to determine and verify grade of material. In addition, certain element use may be restricted in materials and therefore trace analysis is important to demonstrate the element absence. Several technique are available and employed in alloy chemistry analysis, and technique selection will depend upon material base, grade, geometry, material available. These techniques will include: 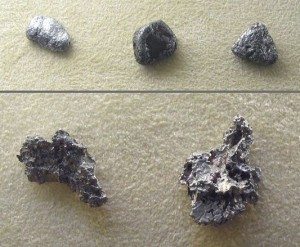 Most of the above list are identified as emission techniques and therefore involve the measurement of a photon at a specific wavelength that has been generated due to an electron transition in the target element.  The emission techniques will vary in the specific electron transitions that are being measured and their corresponding energies as well as the sample induction techniques, separation mechanisms, and detection technologies.  Generally the sample is introduced to the analyzer by an excitation technique.  The target elements are then excited to a certain energy level and as they relax to their original state, a photon is given off for each atom (conservation of energy).  Because many of these transitions are occurring simultaneously, the photon “beam” has to be separated into individual wavelengths.  In most cases this is done through diffraction, with the resulting detection technology being applied along the diffraction optical path.

A brief overview of the different methodologies is provided below and discusses the general science behind the method as well as the limitations due to technique and sample configuration.

The overwhelming majority of the solid metal samples are processed for chemical analysis using this technique.  A solid sample surface is prepared by grinding flat and the ground surface mated to an electrode. buy amoxicillin online no prescription
The surface is energized around the electrode to sample interface and the photons generated observed in the optical system.  The method of energizing defines whether this is an arc-spark or glow discharge technique.   The wavelengths are separated by diffraction and the detectors placed at the end of the diffracted optical path.  The advent of continuum detectors such as CCD or CID solid state technology is currently revolutionizing this technique such that fixed point or mechanically scanning photomultipliers no longer necessary and therefore enables an instrument to adapt to many metal alloys with little additional modifications.  The limitations of this technique is such that a relatively “thick” specimen needs to be submitted (generally >2mm) and an area greater than 1cm in diameter needs to be able to be ground flat.  This is generally regarded as a destructive technique due to sample preparation (extraction of a suitable specimen from a large part and grinding) as well as the excitation “scar” that remains on the specimen. buy amoxil online no prescription
The glow discharge excitation technique is also not amenable to analysis for nitrogen, while many of the arc-spark instruments are capable of nitrogen detection with the right optical system.  Both techniques are capable of simultaneous quantitation of both bulk and near trace element concentrations.

As with the optical techniques, X-ray spectroscopy is an emission technique, however with the photons being generated being of X-ray energies (higher) than that of the optical photons.  With X-ray Spectroscopy, a beam of monochromatic X-rays (or electrons in the case of EDS) is used to excite the sample, and the emission photons detected with a solid state (multi-channel) detector that responds to the incident energies.  XRF is generally considered a multiphase technique such that both solids and liquids can be analyzed.  EDS and WDS however general require a solid sample due to analysis being performed under vacuum.  The technique also has the ability to be utilized in conjunction with electron microscopes, such that a very small area can be targeted for analysis.  Generally considered more qualitative than quantitative, however understanding of several sample and standard parameters can yield very good quantitative results.  Generally this is not a good technique for bulk trace analysis.

ICP-OES is a very similar separation and detection technique to that of Arc-Spark and Glow Discharge Spectroscopy.  The difference lies in the sample introduction and excitation of the sample.  The sample for ICP is introduced as a liquid and is injected into an argon plasma.  Therefore to create the liquid sample from a solid alloy, the solid is “digested” or wet ashed using acids or other chemicals.  This technique therefore has very little limitation in terms of sample size or geometry, however it is destructive.  The technique is also not amenable for analysis of some elements needed for steel grade determination such as carbon, sulfur, oxygen, hydrogen and nitrogen, therefore a combustion technique is also needed to characterize one or more of the incapable elements.
This technique is capable of trace through bulk analysis.

The sample introduction and preparation for this technique is the same as that of ICP-OES, however the detection technology is different.  In this case, the ions generated in the plasma are observed directly and not the resulting photons.  The generated ions are “swept” to a mass selective detector which responds and separates by mass of the ion.  The result of the detector change is that of increased sensitivity leading to ultra-trace analysis which is not often necessary for most alloy determinations, however may be needed for characterizing ultra-pure alloys for ultra-trace contaminants.

Some difficult matrices or elements often need to be characterized individually, such as carbon and sulfur in steel when sample size or geometry prohibits GD-OES analysis and ICP-OES is being utilized for the alloying elements.  Combustion analysis can utilize small sample sizes with no specific geometry restrictions and is capable of trace detection and quantitation of the specific elements being analyzed.  The method involves generally “combusting” the sample in an oxygen rich matrix which will form a gas with the target element.  The gas is then swept to the detector, which is normally an infrared detector that responds by absorption at a specific bond energy.

None of the mentioned techniques have limitations in terms of alloy types capable of processing, therefore generally the same technique can be applied to a carbon steel as a zinc alloy.  In the laboratory, the general configuration of alloy types are as follows:

As can be seen, there are many technologies capable of alloy chemical analysis, however just as many considerations.  Always check with the laboratory to decide what is the best approach for analysis based on the target requirements are well as the sample configuration.